Becoming an adult is a key time when people begin to interact with government in new ways as they make significant decisions about their lives. During this period, young adults are not only defining who they are and what they care about, but they may also be entering tertiary study or further training, becoming a parent, getting a job, leaving home, moving to another region or going overseas.

Becoming an adult in New Zealand looks very different for each person and can be influenced by many variables. The ‘becoming an adult’ project was undertaken by a cross-branch DIA team to look into improving how young adults access government services and prove who they are (manage their identity).

The project was the first chance for the whole design team at the Service Innovation Lab to work together to not only achieve the brief faster but consolidate our approach on how we run research discoveries.

Part of this was to test our new measurement framework to better understand what good work looks like at a project level. For more detail read What Does ‘Good’ Look Like? Innovation in Public Service Design.

The project team comprises a product owner, 4 service designers and a scrum master, and the work was undertaken over 12 weeks. With a limited timeframe to complete the research the team used the following approach:

To help guide our interviews from broad to narrow areas of interest we designed a series of activities and tools. In particular, we wanted to deep dive into what control/independence looked like to young adults as well as how they gained and used various types of attributes and information about themselves online and in person. The tools were designed to make it easy to translate the findings into quantifiable data to identify patterns across our cohort. Alongside these activities we asked about online behaviour, privacy concerns, plans and aspirations. The other benefit of using tools and activities was to give consistency in the quality and type of data collected, as the interviews were being conducted by a larger team with different levels of experience and confidence with this type of research.

The team interviewed 10 young adults aged 16 to 21. They were carefully recruited to give us a diverse set of perspectives over a demographic representation. The group contained a range of ethnic, refugee and migrant backgrounds: a mix of rural, urban and living away from home as well as high and low decile schooling. The team decided longer interviews with less people was the right balance to meet our objectives and identify patterns.

Even from our small sample we managed to collect a wealth of data that could be used to inform actionable insights and challenge a bunch of assumptions. The tools performed well both in the field and during analysis of the data. We also validated our findings against academic studies and research being undertaken by a variety of organisations in New Zealand and abroad to build a bigger picture of where the young adults we spoke to fit in at scale.

During their transition to adulthood, young people are defining their identity; who they are as individuals and what they care about, support or believe. Many were struggling to manage the pressures and influences put on them by parents, peers, family and even themselves. Some were compromising doing something they were passionate about for something that would get them employment, financial stability or would allow them to travel.

Research by Massey University on the topic reveals young adults today aren’t taking on the adult roles and responsibilities in the way previous generations had. While they are legally able to do many tasks on their own, most got help from parents and siblings to access services, such as applying for government support and passports. This made it difficult to understand pain-points as young adults might not be experiencing them directly because others were doing this for them, or they were not doing it frequently enough to remember. For example, when asked about applying for their driver’s licence many could tell us in detail about the test and studying for it, yet none were sure about completing the application process. Their guardians were often left looking after their “serious” or “important” identity documents even after the person had left home.

We were very surprised at their attitude toward technology. Most said they used it frequently, yet there was a real awareness of the negative impact it can have on their lives. Clear distinctions were made between using it for something productive or educational — or for recreation, such as social media. Some even went so far as to monitor the time they spent on their phone and were actively trying to reduce it.

The following diagrams visualise when young adults are creating new IDs and which IDs are most used.

The diagram is a horizontal line with birth at the left end and turning 21 at the right end. The line is punctuated by dots indicating when IDs are acquired and the size of the dot grows based on how many of our cohort were included. The diagram reveals that all had birth certificates and only a few acquired IDs between their childhood and the age of 13 where the majority of ID activity occurs until about 17 years old followed by a minor amount into early 20s.

This diagram shows our 10 young adults all had birth certificates and later between 13 and 17 years old acquired many other IDs, such as driver’s licences and online accounts, such as Google and Facebook. The diagram below shows the strong use of online IDs and large ownership of government issued IDs. Note that we included a wide range of items that might not technically be considered forms of identity but this was to understand young adults perception and awareness of government issued documents. 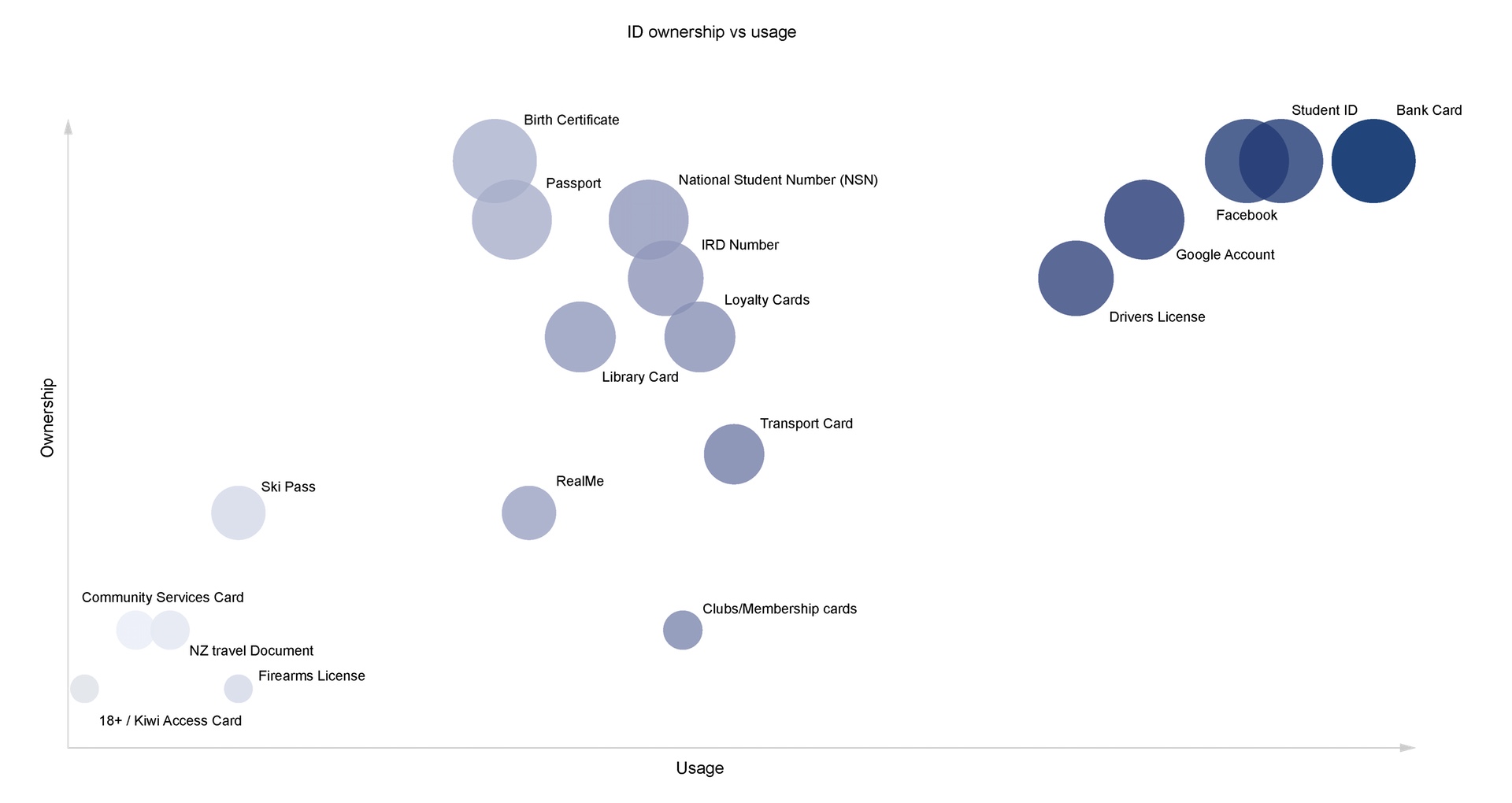 This diagram uses 2 axes, ownership and usage, to plot various types of identity documents and cards young adults had in their wallet or at home. We used this diagram to understand what was the most commonly owned and most used forms of ID. The key insights from this graph is that bank cards, student IDs, Facebook and Google accounts made up the most owned and used followed closely by drivers licence. The least used and owned IDs were Kiwi Access card and firearms licence. There was a cluster of IDs that many people owned but didn’t frequently use which was made up of many government issued IDs such as birth certificate, passport, IRD number and national student number.

Full information on the insights gathered in the Becoming an Adult project can be made available so get in touch. We’ll publish another blog post soon on how we’re exploring ways to share user research. If you’d like to stay across the work coming out of the Lab join our mailing list

“Renting a Property - Continuing our discovery”

Unless indicated otherwise, all content on Govt.nz is licensed for re-use under a Creative Commons 4.0 International Licence.